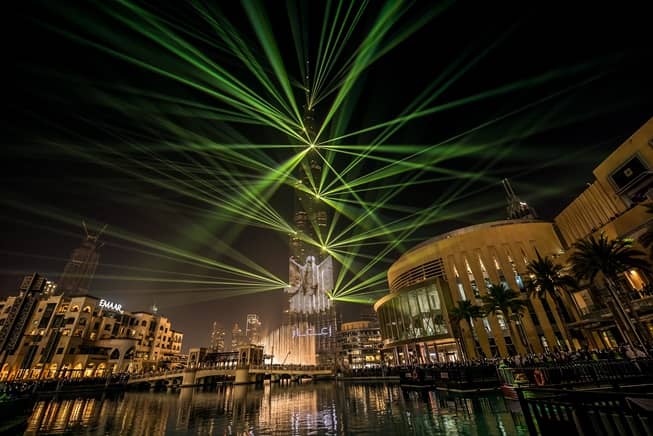 The laser and light display that charmed the world as part of the Emaar New Year’s Eve Gala will continue through March with two distinct sets of experiences. The shows will be complemented by the performances of The Dubai Fountain, ensuring that visitors to Downtown Dubai will continue to be regaled during Dubai’s busy tourist season.

From January 1 to 5, a shorter version of the Emaar NYE 2019 gala will be displayed that will include laser, light and The Dubai Fountain shows. These will be held at 7pm and 9pm on Tuesday and Wednesday, and at 8pm, 9pm and 10pm on Thursday, Friday and Saturday.

From January 8 to March 31, the shorter version of NYE gala will be displayed daily once from Tuesday to Saturday. There will also be two separate laser and light shows from the extensive LED display library of Burj Khalifa. The shows on Tuesday and Wednesday will be at 7.15pm, 8pm and 9.15pm, and from Thursday to Saturday at 6.45pm, 8pm and 9.45pm.

The laser and light displays, which were part of the Emaar NYE 2019 Gala, narrate the story of the UAE under the theme ‘time and progression’. It highlights the heritage of the nation, its progress over the years, and its future ambitions including the Mars Mission. Abstract motifs highlight the continued forward journey of the country.