Russian State Opera is coming to Dubai Opera to delight you with Opera, Aida. The brand-new production guarantees to dazzle you with sumptuous sets and splendid new costumes.

Verdi brings the ancient Egypt on stage with evolving love story at the backdrop of war. The princess of Ethiopia (Aida) falls in love with the Egyptian General (Radames) and he is also besotted by her. Radames is chosen to lead the war with Ethiopia by the king and Aida is left to choose between her lover or her father and her country.

Aida is a gripping love story that will keep you on the edge of your seats until the very end.

Aria such as ‘Se quel Guerrier io fossi!’ sung by Radames in the first act is one of the most famous arias of the operatic world. The most powerful melody comes in the second part of the Opera in the form of Triumphal March to highlight victory and triumph.

A deeply moving opera overflowing with emotion and containing moments of despair and uncertainty. Aida is an unforgettable, inspiring experience.

After his sold-out concert in Dubai in 2018, Iyad Rimawi is back in Dubai to perform for the first time at Dubai Opera. A musically genius composer, Rimawi, was born and raised in Damascus, Syria. His melodious and touching scores have a unique fusion of oriental and classical elements combined with modern vibes. Rimawi has created some very unforgettable themes that have aptly gained him the title of one of the most talented Arab composers of contemporary times.

He was the first-ever Arab artist to sign with SONY Music Middle East in 2012, for his first solo album, ‘Tales from Damascus’. The album was a beautiful compilation of some of his best title themes and songs and instantly reached number 2 in the VIRGIN megastores Middle East chart.

His second solo album, ‘Silence in Syria’ (released in 2016), went straight to the number one spot in VIRGIN Middle East Chart. The album held its number one position for 3 months in a row, an exceptional event in the Arab music scene. His third album, ‘Damascus Now’, achieved the same success as his previous two albums.

Special guest artist, Emirati pianist and composer Hamad Altaee, will perform one of his pieces, Journey of Victory, accompanied by NSO

The world’s Premier Beatles band continues to draw critical acclaim with their flawless recreation of the greatest songbook of all time. Tracing the Fab Four’s journey through the swinging 60s, every tiny detail is forensically observed from their authentic period costumes and instruments, to their witty stage banter and “inflection perfect” vocals. This show is an absolute must for Beatlemaniacs of all ages! 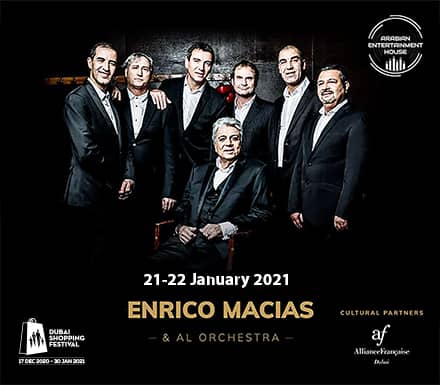 With his joyful music and memorable songs, Enrico Macias will perform live and for the first time at Dubai Opera. Boasting a successful musical career spanning over 50 years, Macias will take his audience on a journey where every song has its sense of place and time, in different languages and styles from the Andalusia in Spain, to France and the Mediterranean. A truly magical performance not to be missed! 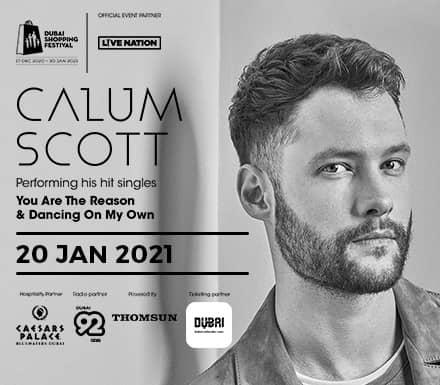 Breakout UK artist, singer and songwriter, Calum Scott is set to perform at Dubai Opera on Wednesday, 20th January 2020. A global superstar in the making, described as the golden-voiced singer-songwriter, his stunning pure voice partnered with his vulnerable and raw lyrics makes an impressive splash across the board garnering him to be one of the best-selling singing sensations of today.

Internationally recognized pioneer of Arabian Electronic music, Dj Said Mrad, is back in Dubai and will be kicking off New Year’s Eve with his greatest hits at Dubai Opera. Bid farewell to 2020 with the music of DJ Saif & Sound and Carrie Gibson’s Nuvo Soul band who will be playing live throughout the night in the iconic auditorium turned into a fully seated flat hall.

Apart from the astounding music of our guests, New Year’s Eve at Dubai Opera promises a sumptuous cocktail dinner with pass-around canapes of starters, mains and sweets, unlimited soft drinks served to your table, and alcohol packages available (all-inclusive in the ticket price.)

-Please make your table selection is strictly based on your group size (2,3,6 or 8)

-The maximum number of tables that can be selected online is up to 1 table.

-Wearing a face mask is mandatory at all times, including inside the Auditorium. You will be asked to leave if you are not wearing your face mask correctly.